The President signed the Tax Cuts and Jobs Act of 2017 on Friday, December 22, 2017. Below are comments on some of the key aspects of the new legislation. Please note: to date no new regulations interpreting these statutes have been issued; such regulations could affect the information contained in this newsletter.

Most individual tax reform is temporary. Unless noted, the provisions discussed below will go into effect on January 1, 2018, and expire on December 31, 2025. 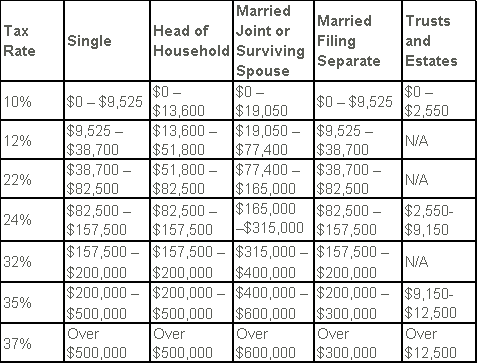 The new legislation increases the standard deduction beginning in 2018 to $24,000 for joint filers, $18,000 for head-of-household filers, and $12,000 for all other individual filers. The deduction will be indexed for inflation in future years. The additional standard deduction for the elderly and the blind is retained.

The new legislation suspends the deduction for personal exemptions through 2025.

Child Tax Credit
The Child Tax Credit will be increased to $2,000 per qualifying child, with up to $1,400 being fully refundable. A qualifying child is a dependent child who is under age 17. The credit begins to phase out for joint filers with adjusted gross income exceeding $400,000 and other filers with adjusted gross income exceeding $200,000.

A $500 non-refundable credit may be available for other dependents who do not meet the definition of qualifying child.

Moving Expenses
The new legislation suspends through 2025, the deduction for moving expenses except in the case of a member of the U.S. military who moves pursuant to a military order.

Prenuptial agreements are not grandfathered in and taxpayers may wish to revisit those agreements in light of these new provisions.

Transfer Taxes (Estate, Gift, and Generation Skipping)
The estate, generation-skipping tax, and gift tax exemption amount would be doubled to $10 million per person (indexed for inflation) through 2025. The new legislation does not incorporate a House proposal to repeal the gift and estate tax. Basis adjustments of assets at death are retained.

Taxation of Investment Income
The tax rates for capital gains and dividends will be left unchanged. Also left unchanged is the net investment income tax (the 3.8% surtax).

Itemized Deductions
For those individuals who will still itemize, the final bill contains notable differences compared to current law on a number of items:

Other Changes in the Final Bill Related to Individual Taxpayers
Some proposed changes included in the House or Senate drafts were changed in the new legislation and now reflect the law currently in effect:

Corporations
The corporate tax rate becomes a flat 21%. The new rate applies in 2018, not 2019 as originally proposed. There is no specific tax rate for Personal Service Corporations.

Pass-throughs
S-Corporations, Partnerships (including LLCs taxed as partnerships), sole-proprietorships and trusts are all eligible for a newly created 20% deduction for qualified business income. This rule is subject to various exclusions, limitations and other qualifications. Geffen Mesher will issue additional guidance on the 20% deduction, but the general rule is a 20% deduction is allowed for US qualifying income, to be applied at the partner or S-Corporation shareholder level. This is an area where additional planning has a strong potential to result in more efficient business structures.

Expensing and Depreciation Provisions (for all businesses)
Under the new bill businesses can expense 100% of certain business property placed in service after September 27, 2017 through bonus depreciation. After 2022, this expensing option is reduced by 20% annually. This provision covers a wide range of business assets and expands the eligibility to used assets.

The section 179 expense limit will be increased from $500,000 to $1 million. Additionally, there is an expanded definition of real property eligible for the election.

The deduction for domestic manufacturing under Section 199 will be repealed.

Other Business Changes
Net Operating Losses (NOLS) may only be carried forward; there will be no possibility to carry them back to prior years. Additionally, they will only be able to offset 80% of income in years they are carried to.

The deductibility of net business interest expense will be limited to 30% of adjusted taxable income; exceptions apply. Notably, businesses with gross receipts of $15 million or less would be exempt from this limitation.

Section 1031 tax-free Like-kind Exchanges will be limited to exchanges of real property.

Meals and entertainment deductions are disallowed under the new legislation with respect to any activity generally considered to be entertainment, amusement or recreation; membership dues with respect to any club organized for business, pleasure, recreation or other social purposes; and the costs associated with an on-site facility used in connection with any of the above items. Taxpayers may still generally deduct 50 percent of the food and beverage expenses associated with operating their trade or business (e.g., meals consumed by employees on work travel).

International Taxation
Significant changes were made to the taxation of international businesses, including a deemed repatriation of post 1986 accumulated foreign earnings. New sourcing rules were implemented which change where activities are considered taxed. Additionally, certain “minimum” taxes apply to entities which pay significant amounts to offshore related parties and new compliance reporting is required for these structures. The rules are exceptionally complex and will need additional and future guidance in many areas.

Financial Statement Effects
Financial statements will require analyses and adjustment to deferred tax items. If a company has an overall net deferred asset, they will— generally—require a charge against earnings or equity as the net deferred asset is revalued using a lower future effective corporate tax rate; the future tax benefits will be realized at a lower rate than is recognized on the current balance sheet. The opposite is true for a company with overall net deferred tax liabilities: generally, it will have a pick-up in earnings or equity as the future reversing temporary differences are taxed at a lower corporate tax rate; hence, a lower future tax liability when compared with today’s balance sheet. In addition, companies with accumulated foreign earnings will have to assess the income tax accounting resulting from those earnings no longer being able to be considered “permanently reinvested” overseas. And, the financial statement adjustment for potentially disallowed or suspended tax effects for interest expense, executive compensation, NOLs and foreign operations will have to be reviewed.

Most of the tax changes take effect in 2018, however in the last week of 2017 taxpayers may consider the following actions:

The new legislation represents a major change in several areas of taxation. Geffen Mesher is ready to assist you in complying with the new rules and to ensure your activities, transactions, and businesses are structured in a tax efficient manner. We anticipate the issuance of new regulations in 2018 and the possibility of additional legislation to address oversights, errors, and unintended consequences in the newly passed law.

Please do not hesitate to reach out to us with any question you have on the new legislation’s effect on you or your business.